How Did You Spend Your New Year's Weekend?

After the ball dropped and the parties ended, how did you spend the first weekend of the new year?

The kids spent new year's eve at Grandma's so the hubby and I got the house to ourselves. (Never, ever happens!) The problem was I was awake 3 hours earlier than usual. I think it was because the house sounds were different. Whatever the reason it was seriously annoying. The one morning I could have slept in!

Because I was up so early I ended up getting the kids back from the grandparents early. They didn't mind though because we had big plans for the day.

We stayed home and had a monopoly tournament! I put some munchies in crockpots along with veggies and fruits to snack on and we spent the day playing the never ending real estate game. 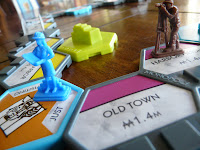 The game went on for awhile and we snacked on BBQ smokies and my Mexican dip. I lost.... I was so sad. Oh well.

Sunday was just as quiet here. The kids got control of the DVD player and we watched many, many episodes of Star Trek Voyager (we love Sci-fi!). The girls worked on crafts and such while they watched and I spent the entire day knitting.

It was so wonderful to just relax with no plans and nothing that needed done right then. I got so much knitting done that my Blizzard Mitts are nearly complete and I'm getting ready to have the pattern test knit. I'd love to have this pattern available in our Etsy shop before it gets too warm for them. :o)

Sunday night I also realized that the phone never rang even once all weekend. I wish we could have weekend like that more often.
Posted by Stephani at 1/04/2011 12:27:00 PM
Email ThisBlogThis!Share to TwitterShare to FacebookShare to Pinterest